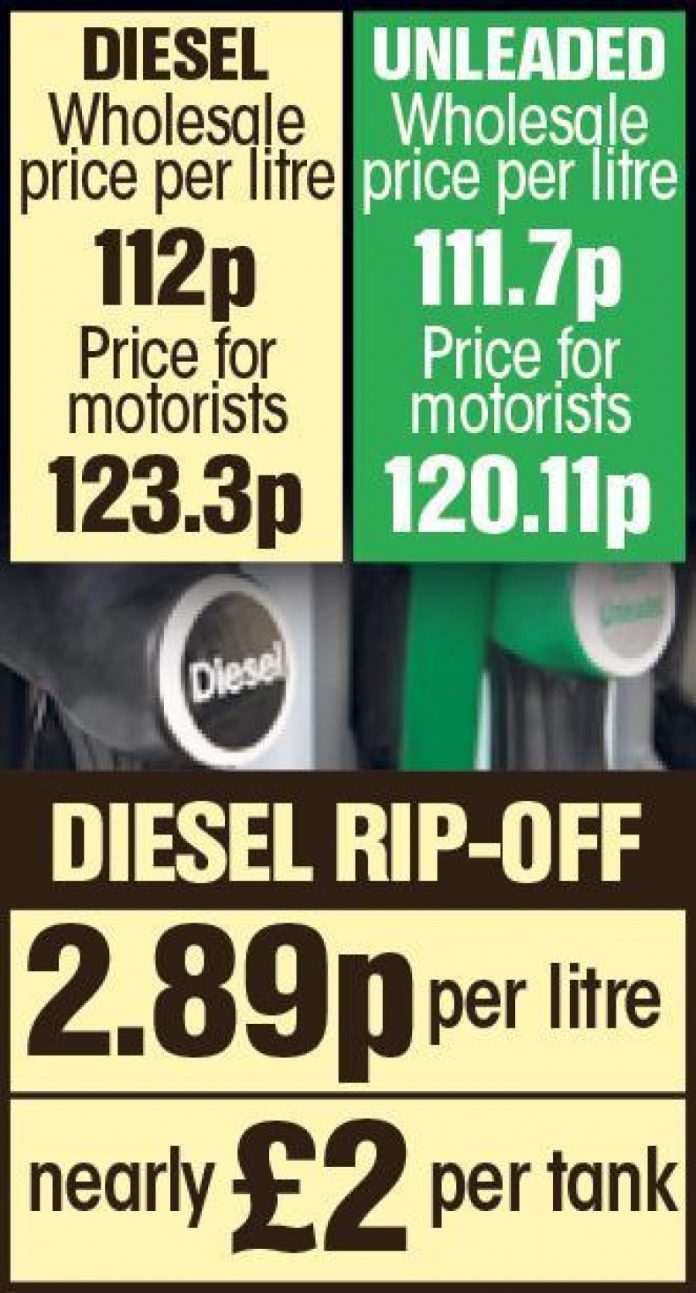 PETROL giants were on Sunday accused of a running a “ruthless” £1 billion diesel rip-off that is hammering ‘White Van Man’ and hard-pressed families.

Campaigners said diesel prices were nearly 2p per litre more than unleaded on average on UK forecourts over the past two years.
And the difference comes despite almost IDENTICAL wholesale costs.

Over a two-year period, the 2p premium equates to an extra £1 billion spent on the forecourt by diesel drivers.

Last week diesel was costing 112ppl on wholesale market – just 0.3p more expensive than unleaded – but 123.3ppl on the forecourt – a 3.19p premium. This equates to nearly £2 per tank.

FairFuel demanded an explanation and said the rip-off was hitting millions of traders and haulage firms up and down the country.

Tory MP Charlie Elphicke said the figures proved the need for an independent ‘PumpWatch’ regulator that monitors price movements in the UK.

He told the Sun: “There is no excuse for a rip of that will be affecting thousands of small business across the land.”
“Diesel drivers will be rightly fuming and it’s why we need a PumpWatch to give them pricing transparency every time they fill-up.”

The figures come amid rumours the Chancellor will use the Budget to increase duty on diesel fuel to address growing concern about air quality and pollution.

There are 11 million diesel drivers across the UK – many who converted after the last Labour Government championed diesel as a green alternative.

Experts claim diesel should be cheaper on the forecourt because it’s cheaper to produce. Diesel is an essentially an early by-product in refining process.

FairFuel said it was also concerned that forecourts charge a higher price to compensate for the money lost on Fuel Card discount schemes used by some firms when they buy their fuel.

Mr Cox said: “Other countries recognise diesel as the commercial heartbeat of their economies and reward diesel drivers with lower duty and trustworthy consumer prices.”

More than half – 51 per cent – of Britain’s motorists are unaware they face higher vehicle tax from April under changes brought in by ex-Chancellor George Osborne, the AA said.

Under rules he announced in 2015, any vehicle which emits over 1 gram of CO2 will pay a standard tax rate of at least £140 a year.