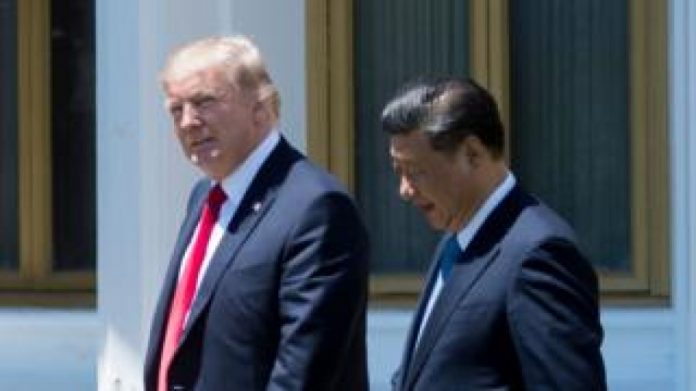 The US president also left open the possibility of re-nominating Janet Yellen as the head of the Federal Reserve, despite having criticised her.

He made the comments days after meeting China’s President Xi Jinping.

China has been accused of suppressing the yuan to make its exports more competitive with US goods.

Before the US election, Mr Trump likened this to “raping” the US, and promised to label China a currency manipulator on his first day in office.

That would have triggered talks between the countries and potentially led to US sanctions – something experts warned would have prompted retaliation.

But in an interview with the Wall Street Journal on Wednesday, Mr Trump said China had not been “currency manipulators” for some time and had been trying to prevent further weakening.

He also said: “I think our dollar is getting too strong, and partially that’s my fault because people have confidence in me.”

He added that a strong dollar had benefits, but would ultimately hurt the US economy.

“[It is] very, very hard to compete when you have a strong dollar and other countries are devaluing their currency.”

Mr. Trump has been highly critical of Ms Yellen in the past, saying that the Fed’s low interest rate policy had hurt savers.

He has also indicated that he would not nominate her for a second four-year term when her current one expires in February 2018.

But in Wednesday’s interview he said he now liked “a low-interest rate policy” and “respects” the Fed chair.

He also said she would not be “toast” when her current term ended, although he added: “It’s very early.”

Mr. Trump’s administration was also said to be “very close” to filling three vacancies on the Fed’s board.