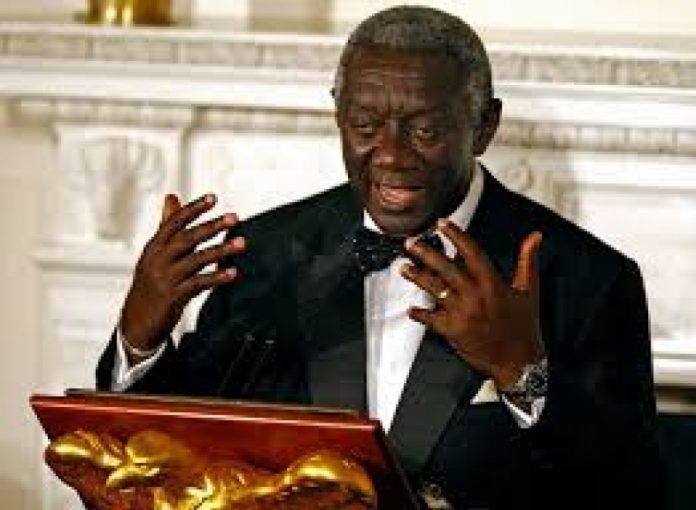 “He is doing well,” Mr Kufuor told journalists on Tuesday, 9 January when asked for his assessment of Nana Akufo-Addo’s first year in office.

“You see”, he pointed out, “we tend to forget that it’s easier to destroy than to build.

“When you inherit a situation where things are so low and down and you want to lift them up, I tell you it’s not easy.

“And, especially where it is in a democracy where everybody has an opinion and we are in a multi-party system, and, of course, contention for power, the rivalry for power and you are put in the driver’s seat, everybody wants to be in the driver’s seat, so no matter the efforts you are making, you have others bickering and criticising and making it look like you are not equal to the challenge or inefficient but with patience and tolerance, and, of course, respect for the rule of law … if you take your time you’ll see that this government really is performing, it’s not doing too badly,” Mr Kufuor said.

In his view, Nana Akufo-Addo is on the right track to achieving his promises despite the limited resources his government inherited.

“The only thing is that the economy; yes politicians before elections will talk to their manifestos – when I come I’ll do this; when you come and you go to the treasury and there’s no money there and you’ve promised, say; free education, free senior high school, you need money to do that, how do you get the money to do it? Unless you go like the government is going: … earn the confidence of investors to come in … and this governing is making headway.

“Within the past three to four months, see the strain of heads of state and powerful businesses that are coming to Ghana, you think they would come if they didn’t see that there’s something good happening here? So Ghanaians should be tolerant and allow space for this government to lift things up, finish them and management them efficiently,” Mr Kufuor said.