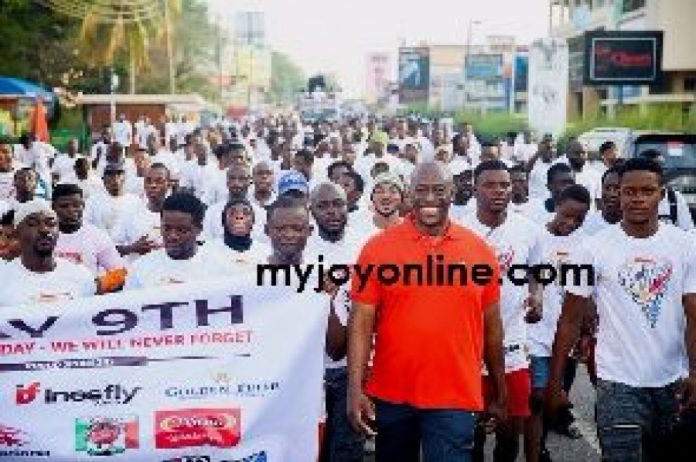 In a commemorative message to mark the May 9, 2001 football disaster, he says the often failure of Ghanaians to honour their heroes leaves only a few people to care for needy people who have served the country to the best of their ability.

The former Country Director for Mnet over the weekend visited and presented assorted items to families of victims of what has become known as the Black Wednesday in Ghana’s football history when 126 fans perished in a match between Asante Kotoko and Hearts of Oak in Accra.

Since that tragic day sixteen years ago, a group of philanthropists under the leadership of Herbert Mensah, with the support of some local companies, have consistently observed the day every year, with series of events in Accra and Kumasi.

This year’s event started with a prayer session at the Kumasi Central Mosque on Friday May 5, 2017.

It was followed by the usual Kumasi Street Walk on Saturday morning. Later in the afternoon hundreds of people joined a May 9 remembrance match between Aboabo Number One and Kantudu.

He paid glowing tribute to Otumfuo for his wise guidance on the disaster day. “For sixteen years we have supported the families who suffered on May 9 that Wednesday night.

The first phone call I made that night when it was raining was to my father Otumfuo, I had tears in my eyes. I had carried some bodies and I had asked Nana for guidance and as always he gave me strength”.

“I went to the 37 Military Hospital and I called Nana again and he told me to be strong. It is the strength that Otumfuo has given me these sixteen years that has encouraged me to support the families of the victims,” Mr. Mensah emphasized.

Hebert Mensah has assured the families of victims of his continued support to them on the occasion of the anniversary.