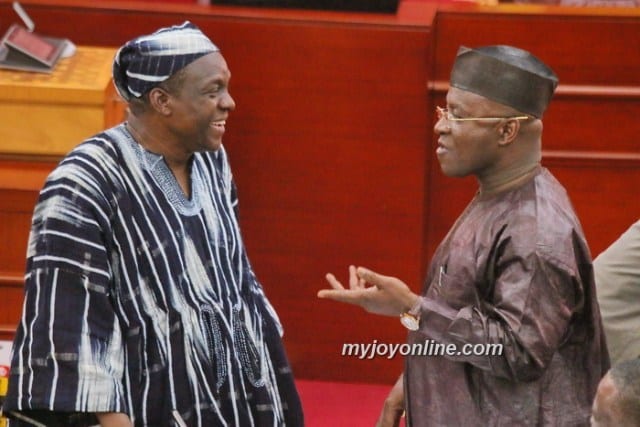 Speaker of Parliament, Rtd Hon. Alban S.K. Bagbin, has directed the leadership of Parliament to constitute a seven-member Committee to consider two Petitions that have been presented to the House by Member of Parliament for Bawku Central, Mahama Ayariga.

The leadership is tasked to form the Committee, whose membership should comprise three from the Minority and four from the Majority before Friday 26th March, 2021 to enable it continue work when the House goes on for the Easter recess.

These two banks were among the many whose licenses were revoked and closed down during the banking sector clean up.

The Petition of Mr. Prince Kofi Amoabeng requests Parliament to:

Investigate the conduct of the Bank of Ghana and the Ghana Stock Exchange for the revocation of UT Bank’s license and delisting the bank without due regard to the rules of Administrative Justice guaranteed under article 23 of the 1992 Constitution;

Directs the restoration of the banking license of UT Bank Limited by the Bank of Ghana and the remedying of the harms done the shareholders’ property rights as a result of the conduct of the Bank of Ghana;

Give any other directives that Parliament may deem appropriate.

(ii) direct the restoration of the banking license of uniBank Ghana Limited by the Bank of Ghana and the remedying of the harms done the shareholders’ property rights as a result of the conduct of the Bank of Ghana;

(iii) gives any other directives that Parliament may deem appropriate.

Speaker Bagbin indicated the Petitions were addressed to his Office but he had to redirect them to channel it through a member as the Speaker cannot be petitioned.

According to him, he went through the Petitions, the Standing Orders, the laws, and the 1992 Constitution and realized the only way to handle it is to bring it to the floor of the House.

He said, “I cannot use my discretion to refuse or admit them for the possibility of the House.”

“These are only Petitions to the House and I only have to admit them and by the Standing Orders when they can be so admitted by laying or through a motion, which would have to be seconded.”

“I opted for the first one to just lay after which it will be before the House.”

Majority leader, Osei Kyei-Mensah-Bonsu, expressed displeasure and disagreed with the position taken by the Speaker.

The directive of the Speaker, he said is sub-adjudicate considering the fact that the matter of these banks is already before the Courts.

He said, “That is my position. And you have made a statement to the effect that it must be referred to the Committee to make some proposals. Perhaps we’ll leave it at that but I disagree with the position that you have taken.”

The leader argued that the issue of the Petition is about the performance of representational function and stressed that question time is one such time and therefore the Petitions could have come in the form of questions.

According to him, the admission of the Petitions would open the floodgates for many people with grievances to also decide to come to Parliament instead of going to the proper institutions for redress.

The Speaker, however, pointed out that he would be happier if Parliament is inundated with petitions because the good people of Ghana would be participating in the activities of the House.

He said, “Now we are in participatory governance and we are not running away from our duties.”

“Be prepared because that is what this House is all about. We open ourselves and are accessible. If the people can make inputs in what we are doing; we are not making it in the darkness…”

“At the end of the day, that should help the people to put some value, not only on what we do but also on their Member of Parliament.

Constituents, he said, will then see benefits from the MP and so it is good for the House and urged for more petitions to come.

The Committee, after it is formed, has until 2nd May, 2021 to submit its report to the plenary.