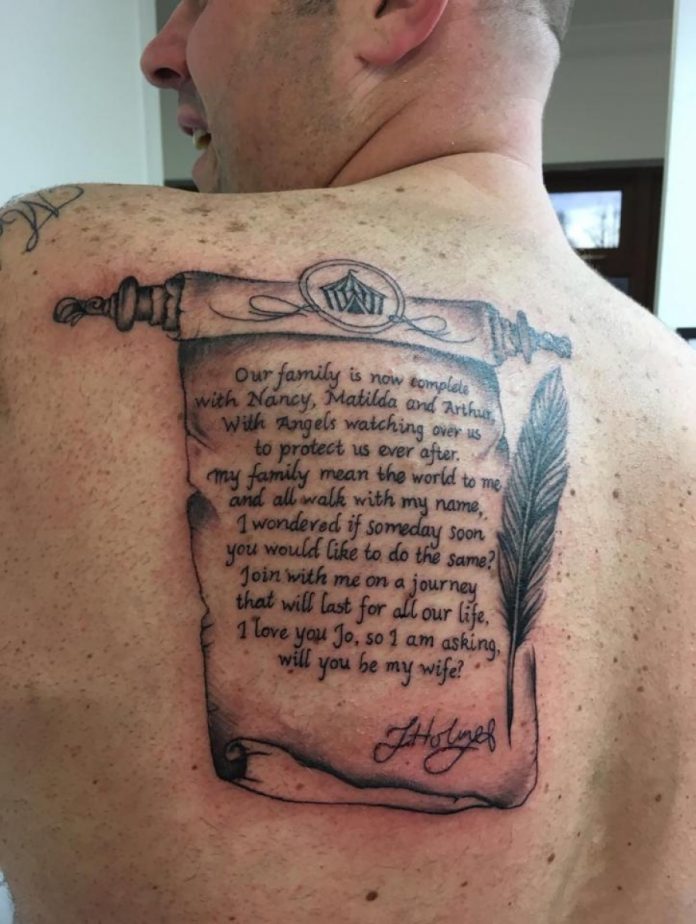 Kevin Sheridan, 37, popped the question to his unsuspecting bride-to-be Jo Holmes, 32, by getting a beautiful poem, penned by his mum, permanently etched on his left shoulder last week.

In footage of the proposal, Jo bursts out crying as she reads the ink on Kevin’s back before jokingly shouting, “I said no,” before then accepting a “gorgeous” white gold and diamond ring.

The parents-of-three, from East Grinstead, West Sussex, have been together for seven years and never planned to get married.

But after plumber Kevin’s romantic gesture – that left hairdresser Jo in floods of tears – the lovebirds are planning a big wedding for summer next year.
Kevin said: “Jo and I have been together seven years and I absolutely love her to bits but we’ve never really talked about getting married. It just wasn’t something either of us were bothered about.

“But as our family has started to grow and we’ve had the kids, who are all Sheridans, marriage started to be more and more important to me. I want Jo to be a Sheridan too.

“I knew Jo would want something a bit different, not just the usual Valentine’s Day, roses and dinner scenario and then I realised that I’d never heard about anyone proposing with a tattoo before.

“Before I knew it my friend Levi was offering to design the tattoo and my mum offered to write a poem. Everything just fell into place.

“I obviously must have done something right because she said yes. Now we’ve gone from not talking about marriage to Jo wanting to get married and be a Sheridan as soon as possible.

“We’re going to get married in our local church then have the rest of the day in a big marquee on my dad’s land.

“I can’t wait. She is the love of my life. I mean yeah, we want to kill each other sometimes but any couple that tells you they don’t are liars.

“With us it’s all emotions out in the open and then we move on. We’ll have a stand up row and the next minute we’re chatting about what to have for tea, it’s great. We just work.”

The couple, who are parents to Nancy-Grace, four, Matilda, one, and four-month-old Arthur, have been friends for 15 years and that friendship blossomed into romance in 2009.

Before getting his tattoo – an inking of a scroll with his engagement poem written on it and a quill – Kevin went ring shopping with Jo’s sister and visited his bride-to-be’s parents to get their blessing.

But the whole family managed to keep the loved-up dad’s plans a secret from Jo, who said she never expected Kevin to pop the question let alone in such an “amazing” way.

In fact Jo thought Kevin, who is a keen harrier hawk trainer, was off to get a tattoo of one of his birds and that she was meeting Levi afterwards for her own tattoo consultation.

Stunned Jo cried so much when she saw Kevin’s touching tribute to their love that she could barely read the romantic message but eventually said yes, before her signature was added to the bottom on the scroll.

Jo, who is currently on maternity leave, said: “So many people have asked if I had any suspicions but I was absolutely oblivious to what was actually going on.

“That made it even more emotional when I turned up. I’m a very emotional person so as soon as I saw the kids names my eyes were completely filled with tears – I could barely even read the rest.

“When I read the last line, I was in floods. I never though Kevin would propose. I thought maybe one day I’d have to ask him to ask me but I didn’t expect anything like this. It was absolutely amazing.

“And it means so much that he asked my parents for their blessing – and that his mum wrote the poem. We’re a really close family so it’s so special.

“I’ve got this absolutely gorgeous ring. I am a very lucky woman.

“I’ve always been a real girly girl but for some reason I just never had that.