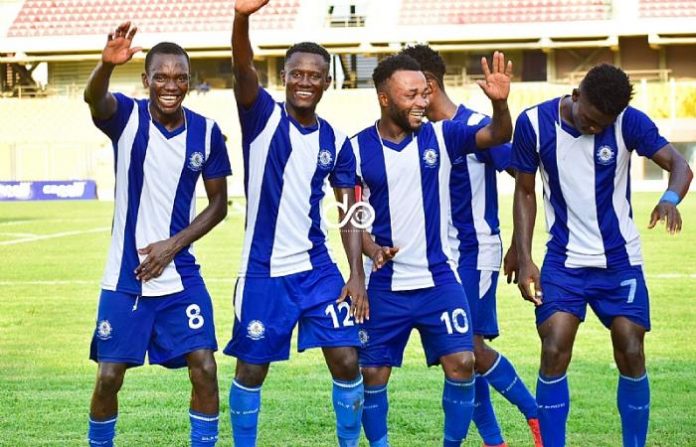 A first-half strike by Samuel Abbey Ashie Quaye was enough to secure maximum points for Great Olympics as they beat Medeama in a match-day 18 encounter played on Good Friday.

The win for the ‘Wonder’ Club sent them top of the league with 33 points with Karela United placed second on 31points as they are scheduled to host on AshantiGold on Sunday.

It was an eventful start to the game with Medeama largely on the front foot and looked the more likely team to take the lead.

Justice Blay nearly opened the scoring for the away side on the seventh-minute mark but his header from close range went narrowly wide.

The home side responded very well from the early pressure by Medeama as they began to dominate play in the middle of the park.

Great Olympics midfielder James Akaminko went close in giving the home side the lead with a ferocious 30-yard drive but his effort was parried away by Medeama goalkeeper Eric Ofori Antwi who couldn’t continue the game a few minutes after suffering an arm injury.

His replacement Frank Boateng had a nervy start to his outing on the field with some indecisive passing at the back.

Abbey Quaye struck the home side in front in the 37th minute after he fired the ball past goalkeeper Boateng with a deep run from midfield.

A scuffle between Captain Gladson Awako and defender Ebenezer Sekyere in the late stages of the first half gave the away side hope of restoring parity but goalkeeper Benjamin Asare kept his calm to deny Zakaria Mumuni.

The second half started with Medeama on the front foot as they searched for the much-needed equalizer.

Zakaria Mumuni nearly got the equalizer for Medeama in the 52nd minute but a terrific block from defender Ebenezer Sekyere was enough to deny the away side.

The pressure from the away side was relentless but striker Ahmed Toure who was largely quiet in the game couldn’t capitalize on a half chance that fell to him past the half-hour mark.

Gladson Awako who had a slow start to the game nearly doubled the lead for the home side in the 71st minute but his well-struck shot narrowly missed the target.

Toure nearly restored parity for the away side but his shot from close range was straight at the goalkeeper who safely gathered.

Great Olympics held onto their solitary lead to secure all three points.