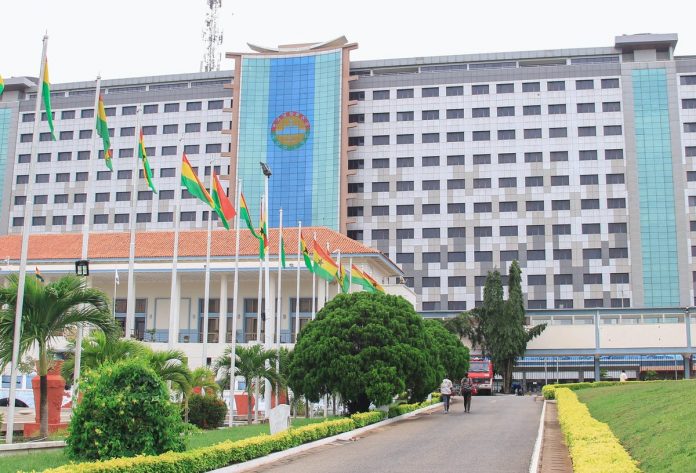 Parliament House has put up a spirited defense of one of its staff accused of attempting to stuff the ballot box with papers during election of the Speaker on Thursday dawn.

A statement issued by the Public Affairs Directorate said by the very nature of the voting system, such an act is impossible as there were 275 members present and voting in addition to the many other staff members and police officers present.

According to the statement, the introduction of any voting material would have meant there would have been an increase in the number of votes cast, which would have exacerbated an already volatile situation.

Video footages captured a Marshal who appeared to have taken something out of his right pocket and dumped it into the box.

Parliament, however, said the staff, a Deputy Marshal, was stationed at a particular spot in the Chamber to protect the ballot box and was only reaching for a taser hanging behind his belt.

“The Deputy Marshal then looked at the taser to turn it on and actually went on to use the taser to prevent one Member from forcefully taking the ballot box, which at the time had two votes cast in it.”

“The box in question was taken away and examined in the presence of some Leadership Members of the House. The Leader in question later came to the Chamber to assure his side of the House that nothing untoward had happened,” the statement said.

The Marshals of Parliament, it said, are mandated to maintain peace and order, and doing anything contrary will be at variance with the dictates of their job.

The same Marshal, it said, intercepted a member of the House, Carlos Ahenkorah, when he snatched the ballot during the collation.

The House admitted it was a difficult night and that most of the staff including the Clerk to Parliament bore the brunt of some of the actions on the floor.

It pointed out that the Staff at all times during the night remained calm and saw to a peaceful resolution of all the issues, which culminated in the successful election of the Speaker.

Parliament expressed regret at the unfortunate events that transpired but indicated it has put them behind and is ready to work towards a more focused and unified membership aimed at promoting best Parliamentary practices and good governance.

It assured all citizens that its staff is dedicated to assisting the Speakership, Leadership and the entire Membership of Parliament in the discharge of their duties.