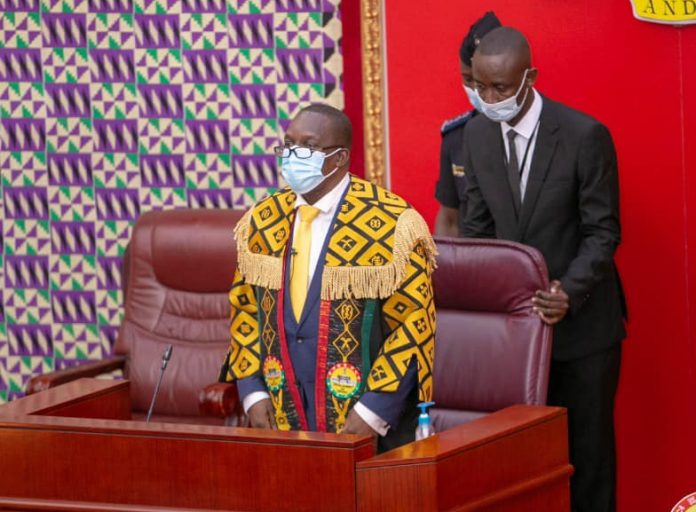 The Parliamentary Press Corps (PPC) has extended its heartfelt felicitations to the Rt. Hon Alban Sumana Kingsford Bagbin for being elected Speaker of the 8th Parliament of the 4th Republic of Ghana.

The Corps acknowledged his invaluable contributions toward deepening Ghana’s Parliamentary democracy since the 4th Republication Constitution was instituted in 1992.

A statement issued and signed by the Dean of the PPC, Nana Agyeman Birikorang, indicated the former Member for Nadowli/Kaleo also recognizes the critical role of the media in consolidating Ghana’s growing democratic stature.

The PPC also congratulated the immediate past Speaker of the House, Prof Aaron Michael Oquaye, for his invaluable service to mother Ghana.

It expressed its profound gratitude to him for supporting the Education Fund of the Corps and bequeathing to the PPC an office space to enhance the work of its members.

Read the full text of the statement below

The Parliamentary Press Corps (PPC) congratulates Rt. Hon Alban Sumana Kingsford Bagbin on his election as Speaker of the 8th Parliament of the 4th Republic of Ghana.

We acknowledge with great admiration the invaluable contributions of Mr. Bagbin towards deepening Ghana’s Parliamentary Democracy since the advent of the 4th Republican Constitution in 1992.

Mr. Bagbin who entered Parliament at the youthful age of 35 believes the Legislative arm of Government is the fulcrum of multiparty democracy hence should be guided jealously and worked assiduously to that effect.

The former Member for Nadowli – Kaleo also believes the media has a critical role in consolidating the gains hence advocated for media freedom and supported capacity building for journalists to enhance Ghana’s fledgling democracy.

The Rt. Hon Speaker ASK Bagbin over the years practically demonstrated his personal commitment towards this goal by supporting journalists and members of the Parliamentary Press Corps to build their capacity.

He always avails himself as a resource person and has positively impacted parliamentary reporters with his vast experience and knowledge in order to deepen Ghana’s multiparty democracy.

Mr. Bagbin believes a well exposed Parliamentary Reporter is better positioned to educate the masses on Ghana’s democratic journey hence he single handedly sponsored selected members of the Press Corps to visit, learn and share best practices with their counterparts in the Parliament of Tanzania called ‘Bonge’.

The celebrated lawmaker contributed immensely towards the passage of several legislations including the Right to Information Act to enhance the work of the media in Ghana.

It is our fervent hope that the Rt. Hon Speaker will bring his over 28 years of knowledge and experiences to bear on his new role as Speaker to further strengthen Ghana’s democracy.

The Corps also congratulates the immediate past Speaker of the House, Prof Aaron Michael Oquaye for his invaluable service to mother Ghana.

We are particularly grateful to him for supporting the Education Fund of the Corps and bequeathing us with an office space to enhance our work and wish him well in his retirement.

The Parliamentary Press Corps assures of its readiness to support every good effort of our friend and current Speaker for the ultimate good of our country.

We, members of the Press Corps, congratulate and salute you on your ascension to the Speakership, the number three topmost position of the Republic of Ghana.