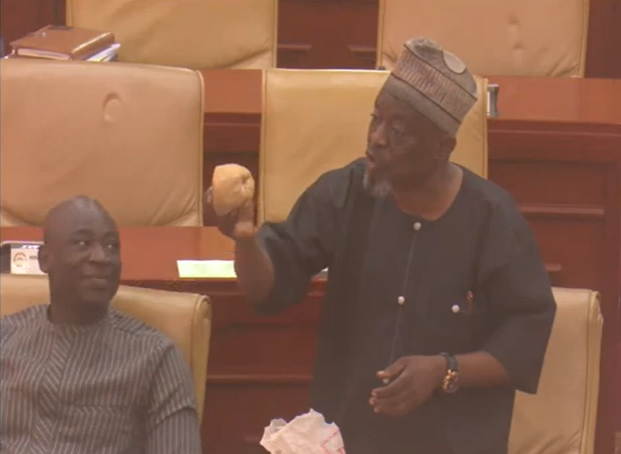 Ranking member of the Communications Committee in Parliament, Alhaji ABA Fuseini has challenged colleague members of Parliament to stand in defense of the Ghanaian people else posterity will judge them.

According to him, the additional suffering government is heaping on Ghanaians through more taxes in the 2023 budget must concern all members of Parliament as representatives of the people.

The Ranking Member, also member of Parliament for Sagnarigu Constituency demonstrated the hardships he said government is visiting on Ghanaians by bringing along a ball of kenkey and fish to the floor of Parliament to buttress his point.

He averred that the issue of the management of the economy in relation to the impact it has on the lives of people is demonstrated in the prices of a staple like the kenkey.

Waving the ball of kenkey to the House he said, “I brought before this House last year, at that time this ball of kenkey, even though has suffered some Kwashiorkor was GH¢2. Mr. Speaker today it’s GH¢4.”

“Mr. Speaker, this fish, the same size I bought last year was GH¢6. This one is GH¢12. This kenkey and this fish alone.”

Hon. ABA Fuseini stated the crass incompetence of the government; especially the Economic Management Team and the Minister of Finance has run the economy into the ditch.

He called on the 98 NPP MPs demanding the dismissal of the Finance Minister to rise up and do the needful and stop the disastrous performance of the administration.