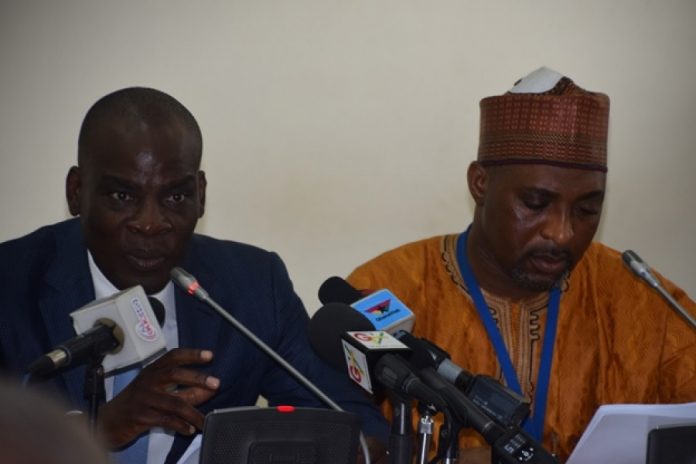 The Minority, led by its Leader, Haruna Iddrisu, Member for Tamale South in a press conference in Parliament on Wednesday said, the report by the Commission on Human Rights and Administration Justice (CHRAJ) on the findings on the issuance of US$2.25 billion Bond last year March by the finance minister vindicate the point they raised earlier that the bond did not follow due process, and seemed hurried to accommodate special interests.

According to them, the CHRAJ in its summary of key findings of the report stated that there were several breaches of constitutional and statutory laws, as well as regulations and official guidelines that governs the issuance of the bonds which were not follow.

The minority said the finance ministry initially made the public believed that the four bonds issued in March/April last year were dollar denominated but the CHRAJ report stated otherwise, that the bonds were cedi-denominated and was opened for on-resident investors.

“We questioned the denomination of the bond, given the events that are described in the report and the substantive interest of a single non-resident investor. The Minister had been emphatic about his denials of the issuance but CHRAJ noted that, the 5-year,7-year,10-year and 15-year bonds issued in March/April 2017, were domestic bonds (cedi-denominated) and opened for non-resident investors, but the statement issued by the Ministry of Finance on 3rd April,2017 misled the public into believing that the bonds were dollar denominated. The ministry of Finance, on realizing that the statement it issued on 3rd April, 2017 was inaccurate, removed it from its website and at the time of this decision, the MOF had not yet replaced it with the more accurate statement”, they stated.

Haruna Iddrisu, quoting from the CHRAJ findings said, the Minister also did not comply with the section 56(1) of the Public Financial Management Act, 2016 (Act 921) and besides the provision of the new Act, CHRAJ was right that the prospectus and processes used in 2016 should have not been used to support the new bonds, and that, “the terms and conditions of all government borrowings shall be laid before Parliament and shall not come into operation unless the terms and conditions are approved by a resolution of Parliament in accordance with article 181 of the Constitution”.

“Who were the beneficiaries of the leak, prior to an auction that also curtailed the period of notice? Note also that JBRs and some advisers were excluded from the issuance of one of two parallel bonds.

Was there prior communication and discussion of terms and conditions, given that the communication may have been specific with respect to bond details”, they questioned.

They also raised issue with conflicts of interest against the Minister, Ken Ofori-Atta which according to them, has interest in some securities market by shareholding in many of the companies that operate within the sector, some who they said were contacted by the Bookrunners on the bond.

“One of the critical concern to the Minority, is the staggering revelation in the CHRAJ report that the Finance Minister, Ken Ofori–Atta, concealed his interests in a number of financial institutions in his asset declaration forms filed after his appointment.

According to the CHRAJ report, documents from the Registrar-General’s department show clearly that Hon. Ken Ofori Atta was a shareholder in Data Bank Financial Services Limited, Data Bank Brokerage Limited and Data Bank Financial Holdings Limited. However, the Finance Minister failed to state in his asset declaration forms presented on 12th March, 2017 to the Auditor-General, that he had shares in the last three companies.

“It is observed that the Respondent had other assets which he did not disclose in his Assets Declaration Form. They include his interests in Databank Financial Services Limited and Databank Brokerage Limited”

This constitutes a willful breach of Section 7 of the Public Office Holders (Declaration of Assets and Disqualification) Act, 1998 (Act 550).

The Minister’s actions also contravene Section 251 of the Criminal Offenses Act (Act 29, 1960) which deals with deceiving a public officer”, they stated.

The Minority noted that based on this findings of willful breaches of Ghanaian law, guidelines and processes in bond issuance, the Finance minister can not stay in office anymore and they are hereby demanding his immediate resignation or dismissal by the President and subsequent to his prosecution.

“We hope that despite President Akufo Addo’s practice of extreme nepotism and cronyism through the appointment of dozens of his family members, friends and known business associates into government, he would not allow familial considerations to hinder the performance of his sacred duty to the people of Ghana.

Rather, he will take appropriate action to ensure that his cousin and Finance Minister, Ken Ofori Atta, faces the full rigors of the law.

Failure to do this would completely invalidate his claims about fighting corruption.

We wish to serve notice that in the event that President Akufo Addo allows his judgment to be clouded by his blood relations with the Finance Minister and refuses to act in accordance with the Ghanaian law to remove him from office within 14 working days from today, we shall invoke a motion of censorship in accordance with article 82 of the 1992 constitution of Ghana to remove him from office as soon as possible”, they concluded.