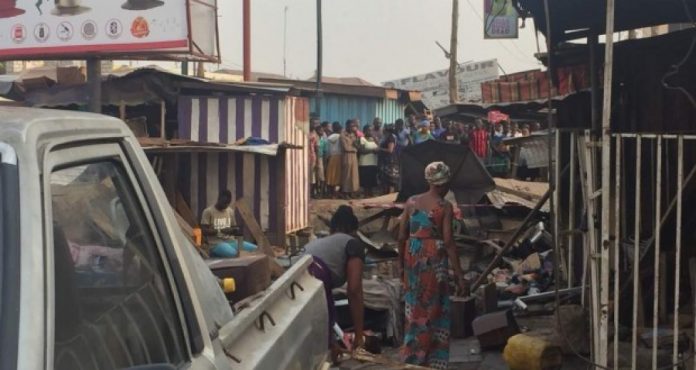 The fire which begun about 8 pm on Wednesday night (January 31, 2018), destroyed about 20 shops at the market.

This is the second time fire has gutted the Dome central market in less than two months.

It is still unclear what action may have triggered the fire which razed about 20 shops, stuffed with goods running into millions of cedis.

Some of the items that were destroyed included perfumes, cosmetics, undergarments, and jewelry.

Some of the affected traders, who spoke to Citi Business News lamented how the loss is going to impact on their ability to repay loans they have contracted from their banks.

“My goods are worth over 200 million, I buy my things from Togo, and we took loans to establish our businesses. This is going to be very hard on us” one trader bemoaned.

The traders say they want the government to come to their aid and help rebuild their shops.

“We are positive that once our leaders hear this, they will come to our aid. We need their assistance in rebuilding our businesses”

Meanwhile the Municipal Chief Executive (MCE) for the Ga East Municipal Assembly, Janet Tulasi Mensah suspects foul play from some traders who were unhappy with her decision not to allow them sell on pavements by the roadside.

“This is intentional. I have made a formal complaint to the police and we will get to the bottom of this” she assured.

The Police and the National Fire Service are expected to commence investigations into the cause of the fire.