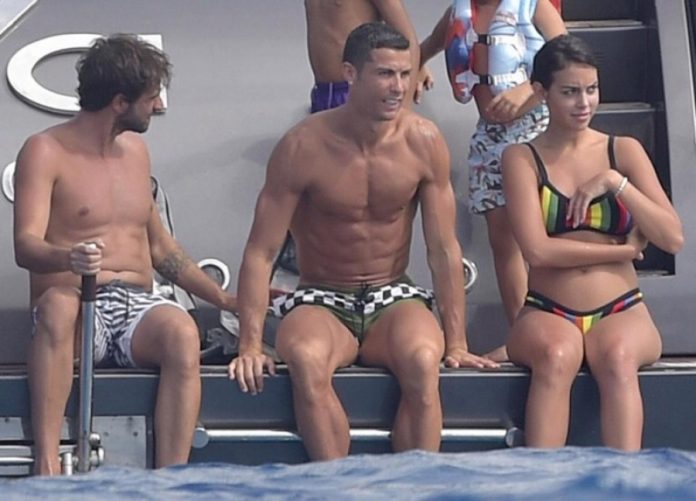 The former Prada sales assistant is believed to be at least five-months gone with a girl by the Real Madrid superstar.

It would be the couple’s first child together, despite dad-of-three Ronaldo recently having twins by a surrogate mum in the US.

And pictures of the pair on a yacht in Spain over the weekend have sparked more rumours over her pregnancy, which is yet to be confirmed.

She appears to show a gathering bump around her stomach, despite her slim frame.

It is believed the 22-year-old and ex-Manchester United ace Ronaldo may be planning a “super baby”.

She has reportedly visited a clinic for DNA tests to check the make-up of a possible child.

Ronaldo, 32, was seen at the same clinic in the Spanish capital just days earlier.

Georgina is believed to have visited a clinic to talk about a super baby in the past.

Ronaldo and his girlfriend now have a busy family to look after following the arrival of twins by a surrogate.

Him and Georgina were seen for the first time in public this week since the birth of the twins.

They were joined by his mother Maria Dolores and his seven-year-old son Cristiano Ronaldo Jr as they touched down in Ibiza.

A source told a Portuguese newspaper recently: “They are very happy with the arrival of the baby.

“Everyone adores Georgina and are satisfied with this relationship.”

Rumours sparked this week secret talks by Ronaldo had been held on a yacht in Ibiza with PSG owner Nasser Al-Khelaifi over a potential world-record breaking move.