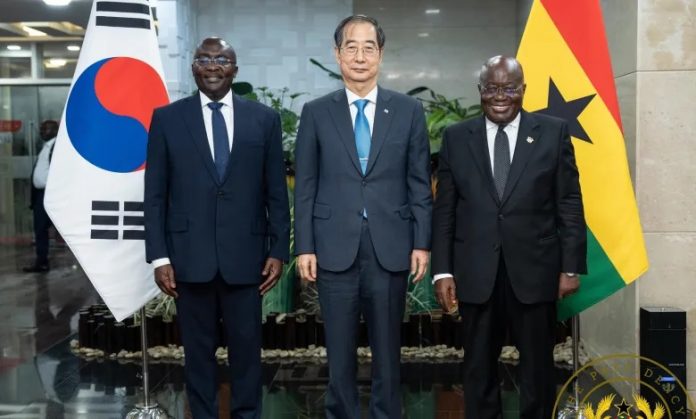 The Republic of Ghana and Asia giant, the Republic of Korea, who established diplomatic relations as far back as 1978, have pledged to step up those relations and to take bilateral and economic arrangements between them to the next level.

The two countries made the pledge when President Akufo-Addo and the Prime Minister of the Republic of Korea, Han Duck–Soo, met at the Jubilee House on Friday 2 December 2022, as part of the Korean leader’s three-day state visit to Ghana.

Addressing Prime Minister Duck-Soo and his delegation, President Akufo-Addo observed that he is a big admirer of the development story of Korea and he believes that the Korean story is a model that Ghana can emulate in her quest for rapid development.

“I think that the relations that we have had that covers economic ties have been a strong one. We are very appreciative of the assistance, contributions that the Korean government and Korean institutions have made towards the development of our country.

“So I don’t exaggerate when I say that you are one of the most important partners, both trade relations, investment cooperation as well as well as the partnership in the international arena” he added.

President Akufo-Addo in his address indicated that Ghana has her eye on developing a strong nuclear energy sector and he believes that Korean expertise in that area can be tapped into by Ghana to fast track the nation’s enterprise in that regard.

President Akufo-Addo, added that after the visit of Prime Minister Duck – Soo, Ghana’s Ambassador to Korea, will liaise with the relevant institutions in Ghana and Korea to kick-start the process of cooperation in that sector.

In the area of infrastructure, President Akufo-Addo, observed that he is looking forward to the assistance of Korea to construct a state of the art bridge over the Volta lake that will link the main land to the Afram Plains.

“The Afram Plains is potentially, a very lucrative and fertile area of Ghana which is beyond the Volta Region and is the main river that runs through our country. The development of the plains will be accelerated if we are able to build a strong bridge across it” President Akufo-Addo noted.

“I have been to your country and I have seen the technology and the work that you have done as far as bridge building is concerned and I will particularly be interested in seeing to what extent we can find an understanding as to how we can develop Korean assistance for the development of that bridge” the President added.

Prime Minister of the Republic of Korea, Han Duck-Soo, in his statement, noted that 45 years after Ghana established diplomatic relations with Korea, his country stands ready to take the cooperation that exist between African countries and for that matter, Ghana, to the next level.

Prime Minister Duck – Soo, in his submissions, hinted that the new President of Korea Yoon Suk-Yeol, is keen on reviving the “Africa – Korea Forum” which has not been held in a long time.

The first one was held in 2006. President Akufo-Addo welcomed the decision of the Korean leader and noted that he is looking forward to the fine details of same in the very near future.