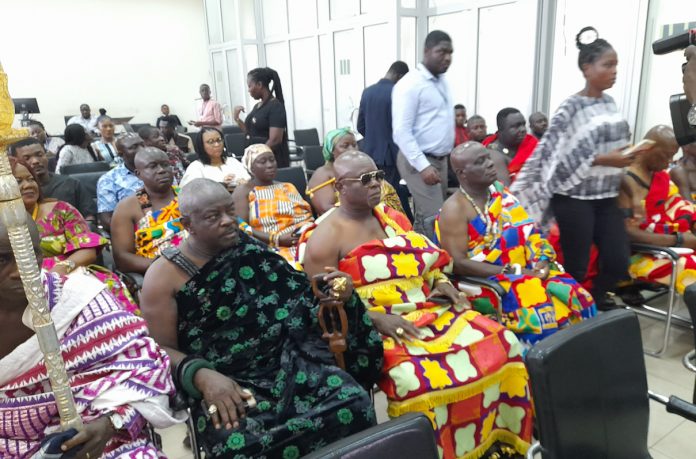 A ‘hoard’ of traditional rulers are attending the sitting of the Parliamentary Committee investigating the allegations raised in the Vote of Censure Motion against Finance Minister Ken Ofori-Atta.

Dressed in full regalia, the presence of the chiefs is expected to be a moral booster for the Finance Minister.

Mr. Ofori-Atta will be defending himself at the Adhoc Committee today Friday 18th November.

The Minority have raised seven grounds on which they are seeking Parliament to pass a vote of censure on the Minister responsible for Finance in accordance with Article 82 of the 1992 Constitution.

1. Despicable conflict of Interest ensuring that he directly benefits from Ghana’s economic woes as his companies receive commissions and other unethical contractual advantage, particularly from debt overhang.

2. Unconstitutional withdrawals from the Consolidated Fund in blatant contravention of Article 178 of the 1992 Constitution supposedly for the construction of the President’s Cathedral;

3. Illegal payment of oil revenues into offshore accounts in flagrant violation of Article 176 of the 1992 Constitution:

4. Deliberate and dishonest misreporting of economic data to Parliament 5. Fiscal recklessness leading to the crash of the Ghana Cedi which is currently the worst performing currency in the world:

6. Alarming incompetence and frightening ineptitude resulting in the collapse of the Ghanaian economy and an excruciating cost of living crisis;

7. Gross Mismanagement of the Ghanaian economy which has occasioned untold and unprecedented hardship: