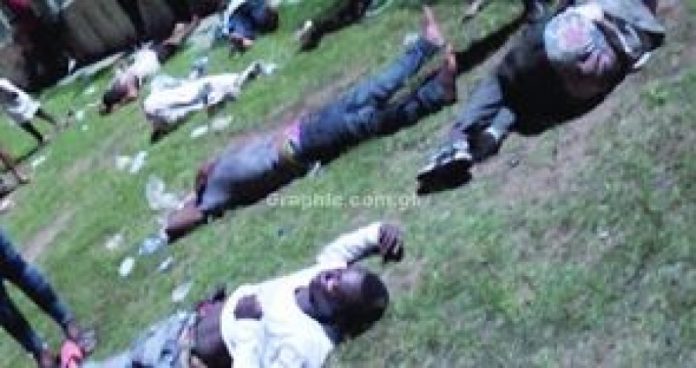 The company said it was difficult to determine the ages of the revellers at the gates since those who came appeared to be of age.

The Marketing Manager for the alcoholic beverage, Samuel Yaw Amankwah, said the company with its unblemished reputation would not have deliberately offered alcohol to people who were below 18 years.

He said the drink was approved by the Food and Drugs Authority (FDA) with its quality and safety intact.

The press conference which was in reaction to a story carried by the Graphic Showbiz of a boozing spree during the event said its systems remained as thoroughly examined and approved by the FDA and that the alleged abuse of the product during the event was completely unconnected to the safety and quality of Adonko Bitters.

Mr. Amankwah, however, appealed to the FDA to reconsider its decision in closing down the facility of Adonko Bitters Limited.

“We also assure the FDA of our full commitment and cooperation with the ongoing investigation even though we are certain that the outcome will confirm the contents of the product remains what the FDA approved,” he said.

The FDA in a query letter to the company submitted at the press conference alleged that the drink was offered to minors which contravenes FDA guidelines which states in part that ‘No alcoholic beverage shall be advertised in relation to a public function where persons under the legal drinking age are likely attend.’

Against a litany of suggestions, the FDA has temporarily suspended the registration and advertisement licence of the drink to allow for thorough investigation.

It has also slapped fine on the company of GH¢25,000.00 which is to be paid by May 15, 2017. Adonko Bitters said while recalling the products, it is also the public to return the said product they may have for replacement.

“We are happy to note that the special event promotional labelling of the batch makes it even easier for identification and will assist all to separate it from what has always been on the market,’ Mr. Amankwah told the press conference.

“We accept in good faith the administrative charges resulting from the decision of the FDA of a lapse on our part in running promotions for the product with celebrity association without respect to FDA,” he said.

Mr. Amankwah alleged that the sanctions by the FDA were quite harsh and suspect that there could be some unseen hands especially by its competitors to run the company down.

But he assured all consumers to remain calm for the truth to emerge adding that ‘Adonko Bitters’ will be vindicated.